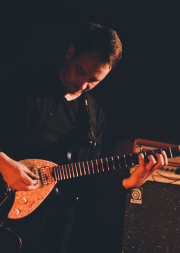 Guitarist Bjössi Klütsch was born and raised in a musician family in Bamberg, Germany.

When he was 6 years old he started to play the violin and later changed his instrument to guitar. In 2002 he went to study at the Berklee College of Music in Boston on a scholarship and graduated from there in 2005. He studied with Tim Miller, Bruce Bartlett, Jon Finn, etc.

In 2007 he moved to Berlin and since has been involved in projects with musicians like Roberto Badoglio, Steve Hunt, Virgil Donati, Marko Djordjevic, etc.

At the same time he is currently teaching at the Universität der Künste (UdK), Berlin.